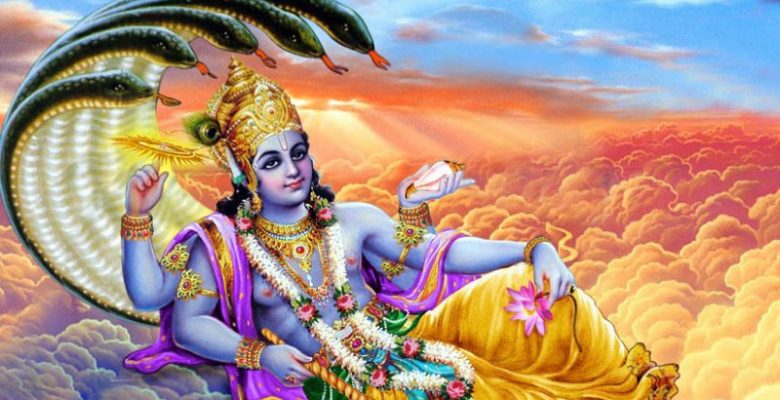 The ancient Vedic literatures from India contain a very elaborate description of the universe which goes beyond what we can observe in the sky with our limited senses. It is a completely different model from the one we have been taught by science since our birth.
In reality our observations of the universe are very limited and theories constructed by scientists based on very limited and imperfect information they can gather through their sense perception and speculation may be incorrect.
Vedic cosmology describes the universe we exist in as being contained within a closed sphere with a diameter of four billion miles. The bottom half of this sphere is filled with water and upon that water Lord Visnu is laying on the bed of Sesa-naga and from his abdomen a lotus flower grows and when a beautiful golden lotus blooms on the top of that plant Lord Brahma, the engineer of the universe, takes birth. Lord Brahma meditates and from within his heart Lord Visnu reveals the knowledge he needs to create the universe.
Our universe, created by Lord Brahma, is centered around Bhu Mandala, a vast expansive plane of 7 alternating islands and oceans. The central ocean is Jambhudvipa, and that is where the Earth is located. Jambhudvipa is surrounded by an ocean of salt water the same width as the island of Jambhudvipa. The salt water ocean is surrounded by the next island (presumably ring shaped) which is ten times the width of Jambhudvipa and that is surrounded by an ocean the same width as that island. This continues with rings of islands and oceans and they keep on increasing ten times the width of the previous island.
So according to Vedic Cosmology the earth is situated on a plane and it is only a very small part of the total plane and there are many more islands further out over the plane across the ocean which we are currently unaware of. And the Srimad-Bhagavatam and other Vedic texts explain the climate and occupants of the various islands. So all these islands are inhabited. They are heavenly compared to our earth. On these heavenly islands the residents enjoy very long lifetimes and a much higher standard of living than what we experience here, on earth.
These islands, including Jambhudvipa where earth is located, are stationary. So according to the Vedic model the earth is not a ball spinning in space.
We imagine the earth as a ball spinning in space because of the movements of the stars, planets, sun and moon in the sky. What we observe happening in the sky seems to be largely consistent with us being on a rotating globe in space  with a relatively fixed array of stars, planets, sun and moon around us. We see in the sky that stars are always in relatively the same position but the planets, sun and moon are seen in different locations in the sky at different times. So we explain this by understanding the moon to be rotating around the earth and the earth and moon together rotating around the sun and all other planets also rotating around the sun on more-or-less the same plane as the rotation of earth.
Vedic cosmology explains the rotational movement we see in the sky causing the sun, moon and all other luminaries to rise and set once every twenty-four hours to be caused by the rotation of the wheel of the sun-god’s chariot. There is a description of a huge wheel turning which rotates a three dimensional structure of stars, always remaining in their fixed relative positions, but the whole three dimensional structure is rotating in the sky above the Bhu-mandala plane [the seven concentric islands and oceans with the earth in the center]. The sun, moon and planets move with this 24 hour rotation but they have their own independent movements also, that is why the sun, moon and planets are seen in different parts of the sky at different times of the year.
There is another movement in Vedic cosmology that takes 360 days to complete. The Axle of the sun-god’s chariot is resting on a huge circular mountain range around the edge of this concentric collection of seven islands surrounded by oceans. That mountain range is called Manasottara. On each rotation of the axle [which causes all the luminaries in the sky to rise and set over a 24 hour period] that axle inches around the Manasottara mountain range one degree. So after 360 days it will again return to the same position after circumbnabulating the whole Bhu-mandala plane. So this rotation around Manasottara mountain causes the seasons and different lengths of day and night as we experience them on earth.