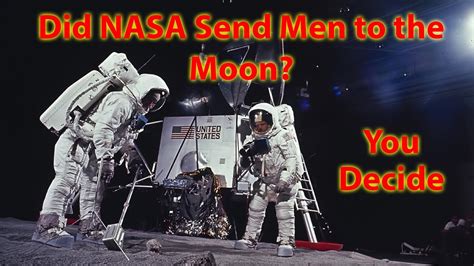 “We will put men on the moon before the decade is over,” President Kennedy emphatically states.

USA went from having no space program at all to apparently being able to send men to the moon and bring them home safely in just a few short years.

In Did NASA Really Send Men to the Moon? You Decide you will see more of President Kennedy’s speech than you have ever seen before. The President makes it very clear that, at that time, 1962, Russia, the USSR, who America were engaged in a cold war with at the time, were far more advanced in space travel, and that the United States could not tolerate it. President Kennedy stresses it is essential that the United States be first to the moon and declares emphatically that Americans will be on the moon before the end of the decade [the 1960s]

This film presents a description of the complexity of the task of sending men to the moon and bringing them home safely, which is far more difficult than anyone imagines, and leaves it up the viewer to decide if it was really possible for NASA, with the cave-man like technology of the 1960s, to actually solve all these practically impossible technical challenges in just seven years.

Did NASA Really Send Men to the Moon? You Decide explores a likely scenario, something much more plausible than the “official story.”

Please spend the 15 minutes to watch this film, even if it seems slow in places, you will be very glad you spent the time.