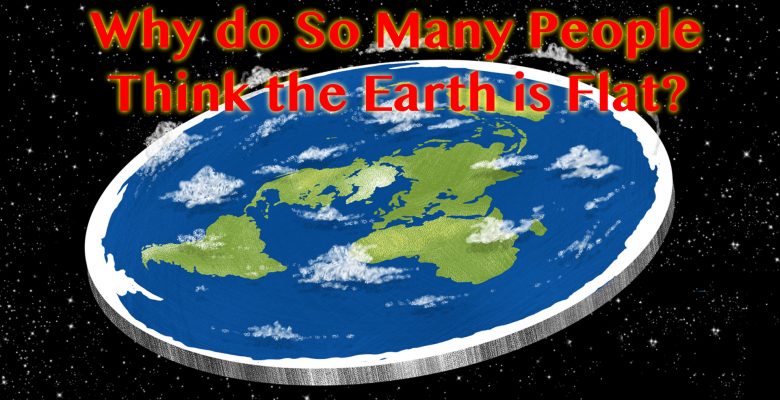 A 2018 YouGov poll [https://today.yougov.com/topics/philosophy/articles-reports/2018/04/02/most-flat-earthers-consider-themselves-religious] revealed that only two thirds of millennials strongly believe the earth is a globe. The poll also shows that 2% of all Americans are firmly convinced the earth is flat and 5% of all Americans say they used to believe it was a globe but now have doubts. So it appears among young people around one in three have doubts the earth is a globe and among the US population in general it is about one in 14 who doubt the globe.

This is an astonishing number of people. 7% of 350 million is 24.5 million people. So, according to this poll there are now almost 25 million people in the United States who are not firmly convinced that the earth is a globe.

This is astonishing to me, a sixty-year old person who was, in the old days, throughly educated in science and the globe earth model.

What I notice these days is generally people under the age of about 40 have no understanding of the globe earth model. You can easily test this yourself by asking them simple, basic questions like, “What causes the phases of the moon?” “What causes night and day?” “Why are the days longer in summer and shorter in winter?” And I think you will find most people under the age of 40 will have great difficulty trying to explain correctly, according to the globe earth model, how these things happen.

So I have been thinking deeply as to why the flat earth movement has taken off so successfully in the past couple of years and I believe there are five reasons that explain this phenomenon:

1. The Failure of Science:

The funding of science has changed dramatically over the years. Now there is very little funding for research into understanding the nature of the universe, almost all scientific funding these days is provided by companies and political organizations who fund the scientists to perform research but the funding is conditional on the scientists performing research and designing experiments to producing the desired predetermined results.

Today the actual science is irrelevant, because scientists are paid to produce research proving a certain point. So science has been reconfigured, instead of research for the purpose of understanding the truth, now science is the art of massaging the data in such a way that you can produce the result you are being paid to produce.

So science, as a result of this ‘pay for play’ system, is now totally corrupted and politicized. Any scientist who dares to practice real science, as it was done decades ago, is immediately ostracized and delegitimized by the ‘scientific community.’ He will never be able to get any of his papers published, he will loose all respect in the scientific community, he will be fired by his university or employer. So in this way scientists have become domesticated by their masters, the big multi-national companies and left-leaning political organizations.

As a result of this corruption science has not been able to provide any useful practical advances for many decades now. And science has lost all respect with younger people, and particularly with intelligent people who can see that scientists are now just puppets in the hands of big corporations and politicians.

One of the big confirmations of the Globe earth model was when NASA claimed to take a photograph of the earth from space on the 1972 Apollo 17 mission on the way to the moon. At the time everyone was very happy to finally see some confirmation of the globe earth model. But as time went on more and more people became suspicious that NASA had faked the Apollo manned moon missions. NASA released all the film and photographic ‘evidence’ but unfortunately it turned out to be so full of impossible errors and contradictions that it only provided more evidence that the Apollo missions were not what NASA claimed them to be. And now, more than fifty years later, NASA openly admits they don’t yet have the technology required to enable men to leave low-earth orbit. So if they don’t have that technology now, they certainly did not have it in the 1960s.

NASA continued to fail, everything they have attempted since has the same fingerprints of fakery and deception written all over it, so much so that polls find up to 10% of Americans believe NASA faked the Apollo manned missions and overseas it is much higher, up to 25% in some countries.

NASA failed with the Space Shuttle which ended in disaster and with two fatal explosions killing all the astronauts, putting a dramatic end to America’s maned space missions.

Since the demise of NASA’s Space Shuttle America is now unable to even put men into low-earth orbit. And low-earth orbit is only 100-150 miles up. What to speak of safely making the trip to the moon and back, a round-trip of around half a million miles.

These days NASA is totally dependent on Russia. Their unmanned rockets use Russian engines and to send astronauts to the Space Station they send them to Russia to hitch a ride with the Russian astronauts.

So it is very depressing for a nation to have a space agency that can’t even get astronauts off the ground but still takes more that twenty billion dollars from the taxpayers every year.

So among young and intelligent people the proclamations and claims of NASA are no longer taken seriously.

3. The Failure of Education:

As I hinted before these days students are attending schools and collages but they are not being provided with a good education. They may be taught to read and write but they are certainly not being taught traditional science like the globe earth model.

These days if they are teaching science in the schools it will be climate science, where they present politically based lies to the students in the hope of radicalizing them and turning them into climate activatists. And of course they will teach “gender science,” they will lie to the students, try to convince them there is no such thing as male and female, there are so many geneders, and it is all fluid, and they can choose whatever gender they want and the school will gladly help them transition.

So with all this confusion of gender and climate science there is no time at all for traditional science in the eduction system.

4. The Failure of Gravity:

Einstein defined gravity as “mass bending the fabric of space-time.” Which is complete and utter nonsense. Time is a dimension and time is always moving forward at a constant rate. You can not bend or distort time with mass. Time will go on undisturbed, no matter how much mass you have, it can not be distorted or bent. As far as space science has already disproven and discarded ‘ether’ and since then they claim there is nothing in space, there is no medium at all in space. So if there is nothing in space you can not bend it or distort it. You can not bend or distort nothing. So Einstein’s ramblings on gravity are nothing short of insanity. And again young people and intelligent people can detect this.

So the magic properties of gravity [which can not be understood or explained because Einstein has defined it in such a crazy way] are no longer understood or believed by thoughtful people.

With a large percentage of the population having lost faith in science, NASA and gravity and being totally uneducated in traditional science, having no knowledge of the admittedly beautiful and completely reasonable globe-earth model, they become wide open to the possibility that the earth is flat.

So the opportunity to propagate the “Flat Earth” message was provided by the ignorance of the general public of the globe earth model and youtube.

A few years ago there were a handful of faithful flat-earth you tubers, a year later it had grown to about a thousand. Then the idea spread very rapidly because youtubers quickly discovered, “if you want lots of subscribers talk about flat earth.” Now we see it has grown to almost 25 million people in the United States alone who are no longer sure the earth is a globe.

So it is not that you can propagate any message or ideology so successfully through youtube or any other medium. No. The reason the flat earth message was so readily and rapidly accepted was it is something that resonates positively with a large percentage of the population. The flat earth message is something a lot of people like to hear. That is why the flat-earth movement was able to take root and expand so rapidly, because it resonates with the people.

Why the flat earth message resonates so well with the general public is a mystery. As a logical person fully educated in traditional science and the globe earth model I can not see why people would accept the flat earth model, without any real proof and no working scientific model capable of predicting what we observe around us. Still people seem to be naturally attracted to the flat earth idea.

This concept of a flat, stationary and central earth is echoed in all the religious and spiritual texts of the world and is an integral part of the knowledge handed down from all ancient cultures.

So in the great picture, which extends back to the beginning of time, the period in which we humans believed the earth was a globe spinning in space is nothing more that the blinking of an eye-lid. Otherwise mankind has always known the earth is central, stationary and flat with a rotating field of stars above and the moon, sun and plants also rotating with the starts but simultaneously having their own independent movements.

So who knows? The globe earth model may or may not be correct, but it appears that the model which will continue to resonate with the people is the model the people have accepted since the beginning of time.

5 Replies to “Why do so many people believe the earth is flat? – Video”