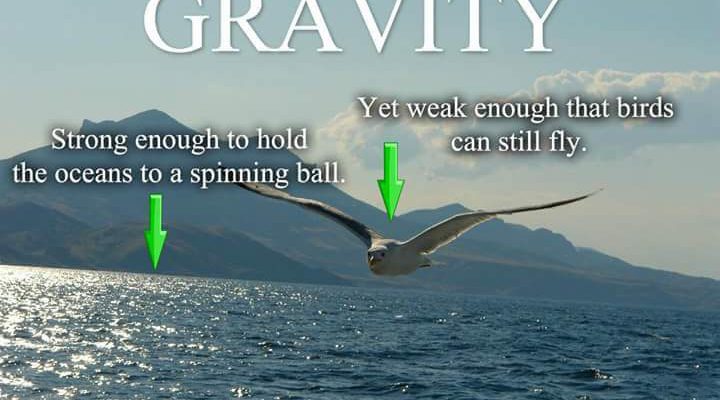 Gravity is the magic glue that holds the ball earth theory together. Whenever there is any question as to how it works the answer from the scientists is almost invariably “gravity”.

Science informs us: “Gravity is a natural phenomenon by which all things with mass are brought toward (or gravitate toward) one another, including objects ranging from atoms and photons, to planets and stars.

In other words, everything that we don’t understand is done automatically and magically by gravity…

Somehow gravity magically and inexplicably drags the entire lower-atmosphere of the Earth in perfect synchronization up to some undetermined height where this progressively faster spinning atmosphere gives way to the non-spinning, non-gravitized, non-atmosphere of infinite vacuum.

Flat earthers say that if this was the case fireworks and rain would behave differently than what we experience. This is perhaps an incorrect assumption as if, in theory, the whole atmosphere and everything in it could spin with the earth at a constant speed gravity could attract the rain, fireworks, etc, to the center of the globe earth.

They question how the atmosphere can exist right next to the void of space and what is stopping the atmosphere from being sucked out into space. If we ask the scientists I am sure they will answer, “Obviously it is gravity…” But this is not a very satisfying or convincing answer.

Flat earthers are also skeptical that gravity can keep all the water in the oceans stuck to the surface of the planet while it is spinning and wobbling its way through the universe. They show the example of putting a wet tennis ball on a drill and spin it and we see the water does not stick to the tennis ball, on the contrary, it flies out everywhere. Of course the answer from science is simply “the oceans are held in their place on the surface of the globe by gravity.” So the natural question would be that if gravity is so strongly holding the oceans in place why does gravity allow little birds, bugs and planes to take of and travel freely in any direction they choose?

Gravity does not exist

Flat earthers contend that gravity does not exist and what when we experience objects falling it is not caused by gravity but rather the simple fact that more dense objects will fall in a less dense atmosphere. Which is exactly what we see happening. If we drop something more dense than air it will fall, but if we drop a helium filled balloon, lighter than air, it will not fall, gravity has no effect on it, instead it will rise up. Also gravity does not have any effect in the water for items that are less dense than water. So flat earthers contend we are seeing density, not gravity acting in these cases.

Gravity has never been proven

Flat earthers contend that although the concept of gravity is based on the theory that all things with mass gravitate or are attracted together we have never seen this. It has never been proven. Scientists say we can’t prove it on earth because earth is so heavy that the gravitational pull of the earth will make it impossible for us to test the theory…

Conclusion: Gravity is certainly a magical mystery and much more research is needed in this area. The flat earthers are raising very interesting questions in this regard.

41 Replies to “Magic Gravity on a Globe Earth”