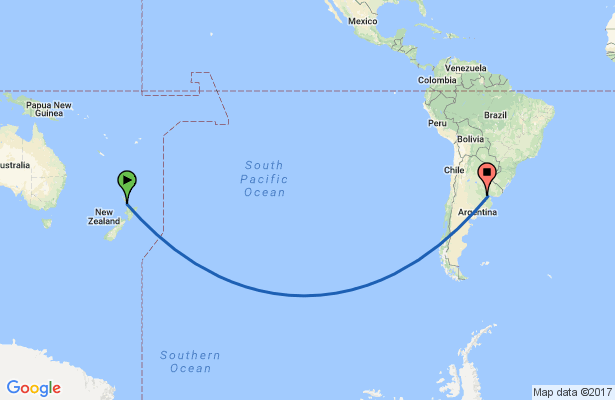 One of the big “proofs” that the earth is flat offered by the flat earthers is airline flights in the Southern Hemisphere: 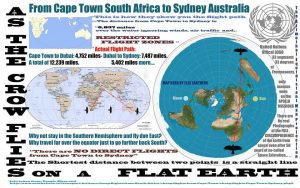 Direct Southern Flights not Possible on the Flat Earth

The Real Reason for Connecting Flights

In reality the reason for airlines organizing their flights to and from southern destinations like this is the demand for many airlines for direct flights from Sydney to Buenos Aires, for example, is not very high. So it makes sense for them to fly their passengers who want to go to Buenos Aires to their hub in North America where they can combine  passengers from a number of flights from various locations onto one flight to Buenos Aires. This is a scheduling / timetabling issue, and it is necessary to keep their flights as full as possible. Even if you fly to Europe from North America very often the airline will fly you to their hub and you change flights to get to your final destination. For example if you want to fly from New York to Amsterdam by British Airlines most likely they will fly you to London and then you will change planes and fly on to Amsterdam.

But flat earthers do not understand airline scheduling and believer these Southern flights would be very long on a flat earth and it would be shorter for the airlines to fly via cities in the Northern Hemisphere to southern cities on the other side of their flat earth.

So just to test this out I recently flew from New Zealand to Buenos Aires and back again and I will write more extensively about this later. The flight took a little over eleven hours from take off in Auckland to the landing in Buenos Aires.

Currently Unable to Confirm the Route

I was trying to get a GPS track using an iPhone, this is generally possible as GPS is only a radio signal and although the aluminum plane body may block quite a bit of the signal the plastic or glass windows on the plane allow the radio signals in. That is why you can get a cell phone signal on the ground in a plane. And I have successfully been able to pick up the GPS data in all the other flights I have been on recently. So that is a little disappointing. I do have all the other data from the sensors of the iPhone. That includes altitude and heading, speed and many other things. So it may be possible to reconstruct the course from that data. So far I have not had time to look into that.

Another strange thing is the plane did not have normal airplane windows. Generally in almost all the airplanes I have been in there is a normal window [which easily allows radio signals in and out] and in front of that there is a manual shutter / blind that you can open or close as you desire. But these windows were different. Electronic. Actually I did not notice. I was near a window and looked out but it was always dark, so I assumed it must have been night outside. But much of the time it was not night and I guess I just had the window closed and did not press the right electronic button to open it.

Impossible on the Flat Earth Map

I was hoping to be able to post the GPS track to show the path of the flight but I do not have it. But it certainly took me from Auckland to Buenos Aires in just over 11 hours which would be impossible on a flat earth [at least according to the Gleason projection] if the plane was flying at the normal 600 miles per hour or so. It could have been flying faster but at 761 miles per hour we should experience quite a loud sonic boom as the plane breaks the sound barrier. That should sound like quite a loud explosion. So even if it was traveling faster, it could not have been traveling much faster than 750 miles per hour. 600 x 11 = 6600, 750 x 11 = 8250, the distance, on a globe earth, as the crow flies, using the great circle route to save flight time on a globe earth, from Auckland, New Zealand to Buenos Aires, Argentina is 6,448 miles. So this could be done easily with an average speed of 600 MPH.

On the flat earth map [Gleason’s projection] the distance between Auckland and Buenos Aires is at least 17,000 miles. To do that in 11 hours the plane would have to be flying at about 1550 MPH, more than twice the speed of sound. And I didn’t hear any sonic booms, so I suspect this is not a possibility and is another proof that the flat earth map is totally incorrect.